Deep within the highest mountain ranges in the south lies a Dwarven kingdom unlike any other. These Dwarves have been shut away from the rest of society for longer than any living man can remember. One could call the Kingdom of Cenaria mistrusting of others, but it is less an issue of trust and more an issue of necessity. The kingdom of Cenaria has had no need for interaction with other cultures. They live completely isolated in a valley surrounded by some of the harshest mountain ranges in the world. These mountains have the most precarious slopes and extreme weather imaginable. The small valley inside this mountainous cage however couldn’t be more different. Lush forests teeming with life. Rich soil producing bountiful harvests and temperate weather make this a valley ideal for any kingdom to settle, if they only could find it. The natural borders and the solitary nature of Dwarves has kept this kingdom secret for a very long time. The precursor to the kingdom of Cenaria was the Dwarven kingdom of Giz. This kingdom lived deep underground within the southern mountain ranges. Giz was torn asunder by war, thus creating the Cenaria we know today.

The Elemental War was fought like most wars over a difference in beliefs. The Doomhammer clan saw The Weave as the lifeblood of this world. Tapping into The Weave was an artform and should be respected and revered. Elementals are the embodiment of this power and were worshipped as gods by the Doomhammer clan. Each element must exist in harmony with each other, preserving the natural balance of the world. The Gravelheart clan felt very differently about both the Weave and Elementals. They saw the Weave as a tool. Elementals as puppets. The Gravelheart clan exploited these powers to better themselves and began use powerful magics to enslave the Elementals to do their bidding. Artifacts of great power were created during this time but for a dire cost. This was the spark that started a war between these two great clans. This war would tear the kingdom of Giz in half. The war raged on for years, neither side gaining any headway against the other. Both sides sustained great losses. Finally the Doomhammer clan and their allies decided it was no longer worth fighting over. The seers spoke of a bountiful land on the surface. A valley untouched by man still in its purest form. The Doomhammer clan called for a truce while their seekers departed to find this bountiful valley. The Gravelheart clan agreed to this truce but had other plans in mind. They saw this truce as the perfect time for a sneak attack. The Doomhammer clan was completely unprepared and sustained heavy losses as Gravelheart broke the truce to crush these Weave worshippers. The Doomhammer clan chose to flee and follow the guidance of their seers. As they fled they concentrated all of their power on sealing their path behind them. When the clan emerged from the depths they were almost blinded by the bright light of the Sun. As their eyes adjusted they found a valley burgeoning with life. The kingdom of Giz was left behind and the kingdom of Cenaria began.

Shut away from the rest of the world the Doomhammer clan and their allies were free to practice their magical arts and elemental worship as much as they desired. Their culture has developed this way for hundreds of years. This has created a truly unique Dwarven kingdom. They are not the largest Kingdom and have no desire for conflict or imperialism. They are simply content with their valley and just wish to be left alone. Elders serve a role of great importance for the Dwarves of Cenaria. Ancestors are always to be respected and revered just as the elements.
The dwarves emerged from the ground in the western part of the valley. Out of respect for the Earth and for hope that it stays strong to keep their enemies at bay a temple of Earth was constructed. To the North of the valley lies an active volcano, it is here a temple of fire was built with hopes that the fire spirits will prevent the volcano from erupting. To the south a waterfall is the beginning of the river that provides the valley with its fertile soil. Here a temple of water was built to thank the water elementals for their gift. Finally to the east lies a forest called the Whispering Wood, named after the wind that passes through the trees. Here a temple of Air was built to thank the spirits of air for spreading the seeds of their crops.

The Cenarian Dwarves live in houses made of wood and stone. There are no roads or huge castles. Their architecture is very humble only serves as shelter. The Dwarves live day to day in harmony with their environment. The “Kingdom” is actually not a kingdom at all and is ruled by a council of elders. The heads of each Clan act as council members that meet each week to discuss the community’s news and plans. Most of the elders are “seers.” Typical societies would call them clerics or “menders.” The kingdom is under the protection of more offensive minded menders called seekers. Seekers come in many varieties, the majority of which are wizards or sorcerers, but menders of all varieties can be found in Cenaria. Cenaria worships the weave and its elements together as one.

There has been no sign of their cousins from the deep ever since they have left. The Whittlewood clan formed an organization called Watchers of the Dark. They assure Cenaria that nothing ever emerges from underground. Most of the Watchers of the Dark simply seal holes and caves. Other’s explore these caves beforehand to seal them deeper within. Under the protection of the Watchers, Cenaria has been free from invaders.

The Doomhammer clan is the oldest of the clans of Cenaria and is well respected by the other clans. They were responsible for leading the Dwarves out of the dark. In addition it was the Doomhammer clan that constructed the elemental temples. The worship of the gods has declined over the past few hundred years and it is almost unseen in the kingdom. Most think the gods were simply powerful menders or weavers harnessing the power of the weave and elements. Most of the Doomhammer clan are seekers, though some seers pop-up every few generations. It was actually Harkyn the first who was the seer that found the bountiful valley they call home. Since then many of Doomhammer clan have fought to defend the people of Cenaria from monsters or possible intruders. This has made the role of seeker more common, specifically Magi. Magi harness the weave while still maintaining physical prowess in hand to hand combat. Some say that the Doomhammer clan actually gets its name from a weapon of great power that was used during the Elemental war but was lot when sealing the passages to the underdark.

The valley of Cenaria is teeming with life of all kinds. Including monsters. Though the Dwarves are the most common creature found in the valley, there are monsters and beasts that try to use them for food. The seekers job is to protect those that cannot protect themselves. The most common threats are vicious animals like shadowcats or giant boar. Sometimes foul magical creature appear seemingly out of no where. These are the bigger threat, but are usually relatively easily dealt with by the seekers of the community. Threats from the deep (if they ever surface) are dealt with by the Watchers of the Dark.

Today the kingdom of Cenaria is experiencing its first struggle. All of a sudden the sun refused to rise in the sky. The seers and elder council could not find the cause of this catastrophe. It is beginning to become colder. Food is becoming more and more scarce. People are praying to the elements for assistance but none has come. Some believe the kingdom of Giz wants the return the Cenarians to darkness. Others think it is the end of days. Most believe that whatever has occurred it is outside of their valley. The world must have gone astray and is beginning to exploit the weave and its elements. Honestly it is anyone’s best guess. The Doomhammer clan believes they should send a few pilgrims from each clan over the mountains to find the cause of this catastrophe and put an end to it. It was decided that each of the 4 head clans would send a seeker to explore the outside world. Some think that leaving the valley is a death sentence. Others see it as a place of honor. Either way it is truly a dangerous journey through these harsh mountain ranges. They chose each of the champions to represent one of the elements.

The Whittlewood clan sent their best seeker by the name Aldor (fire). He is a skilled “mender” of the sorcerer type. He is a fierce combatant and wishes to find the corruption and burn it away. The Zenith clan is sending a their best fighter Godfrey (earth). He is unmatched in the craft of the blade and is leaving to defend the valley from any corruption that might make it’s way there. Vardyn Icespear (water) is a seer (cleric) and wishes to find the source of this catastrophe and return to the valley to enlighten the council members.

Finally we come to the Doomhammer clan. Harkyn (IV) is the only son of Go’el Doomhammer, the clan elder. Harkyn is a skilled magus that has spent his life in the Whispering Wood protecting the community from anything that would endanger it. Harkyn has always revered the element of air (as is common in the Doomhammer clan) and sees it as the element that brings balance and harmony to the rest. He decided to head north to find out what is happening to the world. Harkyn feels honored to be chosen to represent the kingdom of Cenaria. With his waraxe in hand Harkyn departed and headed north.

Harkyn’s journey through the mountains was an arduous one. He spent weeks traversing the dagger sharp rocks and ice cold temperatures. He fought against Yeti, shadow cats, and other vicious creatures. After nearly a month he began to start moving downhill instead of uphill. He emerged from the mountains beaten and battered, but still determined to bring the sun back to Cenaria. As he journeyed North he came upon a small town. This small town needed assistance bringing food to people up north. Harkyn volunteered to help them seeing as though no one should go hungry. Unfortunately the caravan was attacked by bandits. Harkyn barely escaped with his life. Will Harkyn help bring the sun back to his Kingdom?

Harkyn Doomhammer is very strange compared to a typical Dwarf. He has spent his entire life in the kingdom of Cenaria and has never experienced the outside world. He finds many customs and cultures very odd, but he is extremely curious. He is always looking to learn more, meet new people, see new things. Since he has departed he has heard nothing from his three cousins. 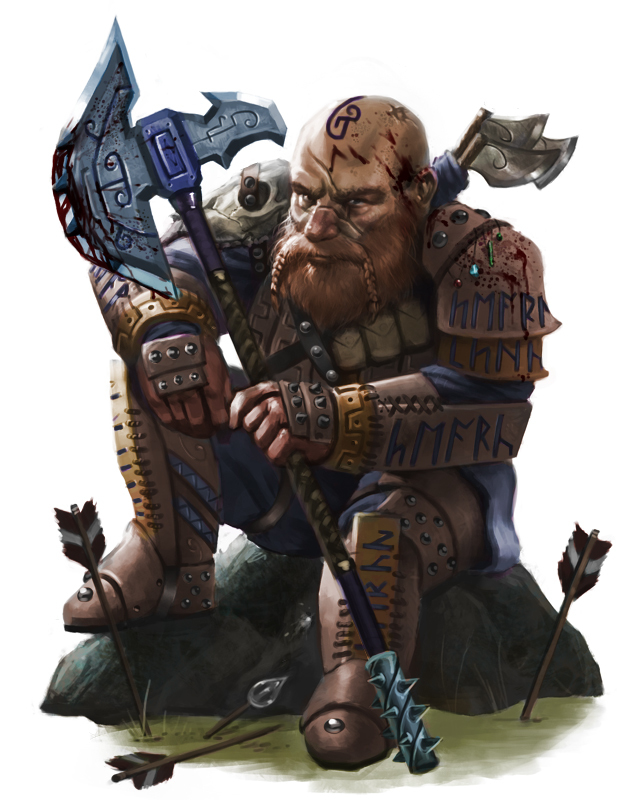